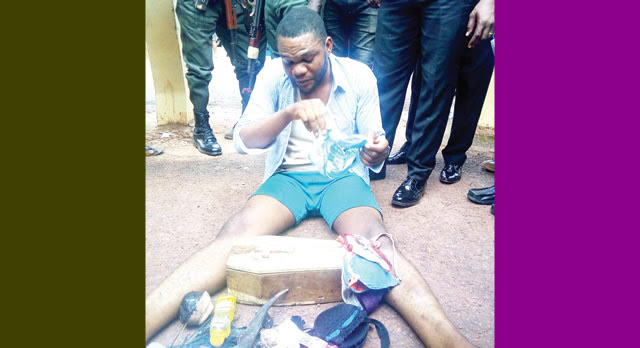 The Enugu State Police Command, on Tuesday, paraded the founder of the Christ Mercy Ministry, Ajuona Obukpa, in Nsukka Local Government Area of the state, Pastor Sunday Egbo, for alleged rape and involvement in money rituals. Parading Egbo alongside 36 other suspects at the command headquarters, the state Commissioner of Police, Ahmed Abdur-rahman, said the pastor had on November 9, 2019, invited a female member of his church under the pretext of organising a crusade starting from 6pm. According to the CP, the suspect asked the victim to come along with the picture of her sick brother for prayers. Abdur-rahman stated, “On arrival, the pastor took her to his house and left while pretending to go and bring other people, who were supposed to participate in for the programme, but he returned around 11pm and dragged her into his room, brought out a magic stone and threatened to kill her if she raised the alarm. “He ordered her to remove her clothes, but the victim refused and the pastor slapped her and tore her clothes and raped her. “Egbo seized her pants, brassiere and brought out a small bottle and wanted to insert it in her private parts, but she struggled and ran naked to the door and shouted, which attracted neighbours, who invited the police to rescue her and arrest the pastor.” Egbo confessed to the crime in an interview with journalists when he was asked to narrate why he was arrested by the police. “I actually raped her in my house,” he stated. Egbo said he approached a native doctor in Kogi State in his quest to be rich, adding that the native doctor gave him a small coffin and other items, and asked him to follow some instructions and he would become a millionaire. He stated, “I paid the native doctor N200,000 to get the coffin and flute. He told me to do certain things, after which I would get a Ghana-Must-Go bag full of money in my room. “But after two weeks, the money did not come as the native doctor had assured me.” The CP warned criminals in the state to repent or move out of the state as the command would stop at nothing to fish them out. He said the 36 other suspects paraded committed various offences ranging from conspiracy, cultism, armed robbery, unlawful possession of firearms, murder and vandalism. Abdur-rahman said their arrests were made possible through intelligence-led policing measures in collaboration with local vigilante groups.

Sowore: Group Reports Buhari To UN Due To Continue Detention

Fans Protest For Banning Naira Marley In An Event In Unilag