Dad married daughter, had sex with her weeks after boyfriend was killed 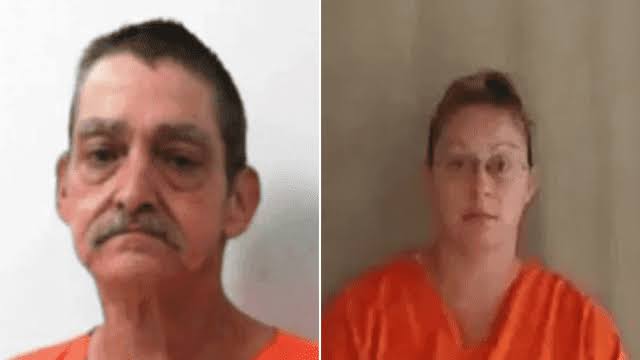 A father who allegedly married and had sex with his biological daughter has confessed to killing her boyfriend, authorities say. Larry Paul McClure, 55, and Amanda McClure, 31, are both charged with first-degree murder in Skygusty, West Virginia in connection with the death of Amanda’s boyfriend. Thomas McGuire, 38, on February 14. McGuire’s body was discovered on September 24 in a makeshift grave after Larry McClure, a registered sex offender, told state police where to find the body. In a handwritten letter to court officials dated November 4, Larry McClure confessed to murdering McGuire and pointed to his daughter as the ringleader of the murder. He says he does not know why Amanda wanted to kill her boyfriend. The Bluefield Daily Telegraph also recently obtained court documents that revealed an incestuous relationship between Larry and his daughter. In a criminal complaint, State Trooper KM Saddler wrote: ‘Larry McClure and Amanda McClure are biological father and daughter…Larry McClure and Amanda McClure did engage in sexual intercourse at the aforementioned address,’ referring to Larry McClure’s home. Although Larry McClure said he does not know why his daughter wanted to kill her boyfriend, he failed to mention his alleged sordid relationship with his daughter, but did say ‘Amanda was spending McGuire’s monthly Social Security checks.’ According to Saddler, McGuire was struck in the head by a wine bottle, tied up then injected with two vials of methamphetamine. ‘After the injection, he was strangled,’ Saddler wrote. McGuire’s body was later buried in Larry McClure’s backyard before it was moved to his side yard. Less than one month later, Larry and his daughter travelled across the state line to Tazewell County, Virginia where they married on March 11 by a United Methodist Church minister. Amanda McClure allegedly listed a fake name for her father on the marriage license. Marriage between a father and daughter is illegal in Virginia and carries a penalty of up to six months in jail. Larry McClure was later arrested for failing to register as a sex offender and while in jail he confessed the McGuire’s murder in the handwritten letter. On the last page of the letter, McClure wrote: ‘I just want it to be over. NO TRIAL. NO TAXPAYERS MONEY SPENT FOR A TRIAL.’ Below that, he wrote ‘Guilty/No Contest’ and signed the bottom of the letter. Saddler said more charges may be filed against the suspects and the investigation is still ongoing.

Ad Mom fights school security guard after her daughter was turned back for fixing...

To- El-Zakzaky Aims To Turn Nigeria Into An Islamic State

Davido orders one of his Crew Members out of his house

If I Know Me

Gentleman (⋆ as Tilmann Otto 1975 in Osnabrück, Germany) is a reggae musican. Gentleman...

The Specials (also known as The Special AKA) is an English "2 Tone" ska revival...

Straight From My Heart

Rockin Around The Christmas Tree